Ever have one of those moments where something, some product or piece of pop culture, slips under your radar?

That’s what happened to me and the Philips Norelco electric shaver 8900. I knew it existed. It was on my list of products to review. But I never took a closer look at the device.

I delayed the review and wrote about other shavers and men’s products. But now that I have thoroughly inspected and tested the shaver, what I discovered surprised me.

Now, did it surprise me in a good way or a bad way? Well, you must scroll down to find out.

Below, I explain the unique features of this shaver that set it apart from other devices in the Philips Norelco lineup of rotary electric razors.

I also give you a detailed overview of the shaving experience, maintenance, and items that come with the 8900. By the end of my review, you’ll know if this shaver is the one for you. Let’s get started.

The Philips Norelco 8900 Shaver: One Rung Down from the Big Leagues

For a long time, the Philips Norelco electric shaving lineup didn’t have a true mid-range device. And that was a shame. Philips only manufactured the 9000 series in the Netherlands. The rest of the models were manufactured in China.

With the addition of this shaver, you now have the option to buy a mid-range shaver with the newest in Philips Norelco’s shaver tech for a reduced cost. The best part? Philips Norelco manufactures the 8900 in the Netherlands.

This may not excite you, but as a shaving aficionado, it tickles me in all the right spots. 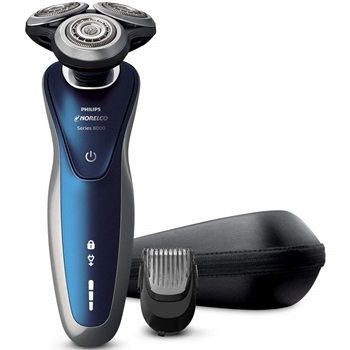 The 8900 sits on the edge of their high-end 9000 series, and the rotary head design is nearly identical.

Philips Norelco advertises their 9000 models as having the “Pro” version of the blades you’ll find on this shaver, but truthfully there’s no difference. When you replace the blades on this shaver or its more expensive cousin, you’re ordering the same blades.

And that’s fantastic news for budget conscious consumers. The 8900 is essentially the 9000 series shaver with some features removed. The motor is the same, and you get the 8-directional head design. That’s the same head as the 9000 series but at a reduced cost.

The body of the 8900 reminds me more of the 7000 series than the bulky 9000. That is by no means a bad thing. I like the way this shaver feels in my hand. The plastic front facing plate gives way to a textured rubber on the entire backside. It’s smooth and grippy at the same time.

Dropping this shaver is nearly impossible. It fits snugly in my hand and I can hold it in a few unique positions, although holding it like an ice-cream cone seems to be the most comfortable.

The shaver weighs less than one pound, and it isn’t any more fragile than other shavers. They’re all made of plastic these days and that has its advantages and disadvantages.

Overall, with the 8900 in your hand, you’re looking at the basic advancements brought about by the 9000 series along with tested ergonomics of the 7000 series. If it was a middle child in a big family, I’d expect big things from it. Let’s see how it shaves.

Get Philips Norelco 8900 at Amazon

I’ve shaved with every brand that competes in the electric shaver space, and Philips is really the only rotary shaver worth the investment. Every time I come back to review a Philips shaver, I need a shave or two to adjust to their technology.

If you’re an old Philips pro, this won’t come as a surprise to you. But for those of you jumping in Philips shavers for the first time, keep in mind that some ostensible peeves will resolves themselves. These include the best way to shave the hair under your nose, or the optimal circular pattern to shave with. 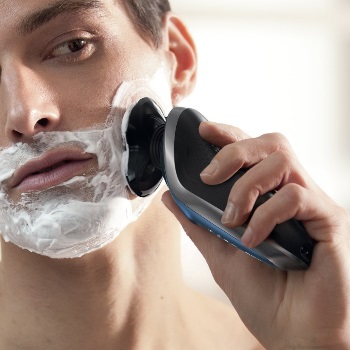 Ultimately, a great shaver makes that learning curve worth it. And the 8900 is no exception. In fact, it’s my favorite shaving rotary outside of the 9000 line. Which makes sense, considering this shaver utilizes much of the same technology and it’s made in the Netherlands.

I think Philips’s Aquatec technology stands out among wet and dry shavers. And wet shaving with the 8900 is a very easy experience. Whether you use foam or just some water for lubrication, this device doesn’t bog down or clog up as you shave.

The 8-directional heads catch hairs in fewer passes than lower end models. This is especially noticeable around your jawline and neck. Hair in these areas grows in every direction. At least it does for me. But the 8900’s rotary heads cut it all regardless of my hair growth.

The V-Tech blades are identical to the ones found in the 9000 series. In my experience, they are sharper than the lower end heads. The blades also have a second row of teeth, something I can’t say about the 7000 series. With the 8900 you essentially double the number of blades rotating and cutting hair.

Let me say it again, this shaver cuts hair exceptionally well. The downside of its efficient cutting power is that it might be too intense for men with sensitive skin. This is nothing new for rotary shavers. But I think it’s especially important to mention with this device.

The LED indicators on the front facing panel are basic. They notify you on the essentials of your shave, like battery life and when the travel lock is on.

This is clearly one way that the 8900 differs from its more expensive brethren, the 9000. So, if you’d prefer a more intelligent display, you must spend more money.

Honestly, I think this shaver is a sleeper hit. It shaves just as well as the 9000 series for way less money. I enjoyed using this shaver during both my wet and dry shave tests.

The Extras: Lean but Worth It

The 8900 I tested didn’t come with a cleaning stand, so the only extras I have to test are the charger, trimmer, and travel case.

The best thing I can say about the charger is that it allows you to plug into outlets ranging from 100v to 240v. Of course, you’ll have to buy an adapter if you’re traveling to Europe. But at least you can bring your shaver. You can’t bring many American shavers across the pond. 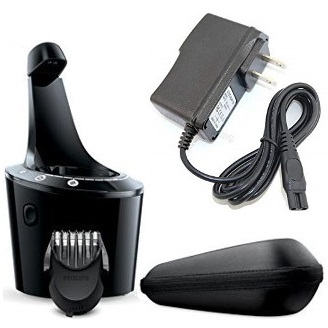 Anyways, the case easily fits the shaver and, with some fiddling, the trimmer. Embrace the hard-shell case. Use it well and often.

Last is the trimmer. Sorry, the Beard Styler. Philips markets this little trimmer as a beard styler because it ships with a sliding comb guard. The guard has five different settings and works fine. You can’t really use it for anything other than sideburns or a thin, Dick Dastardly style mustache.

My one complaint about the trimmer is that you must remove your shaver head and snap this thing on. It isn’t a big deal most of the time.

But sometimes, when all you want to do is quickly shave and line up your sideburns, it can be that one thing that gets on your nerves. And if your significant other is half-ferret and hides your things in the dark reaches of your bathroom for no damn reason this minor problem with the trimmer can fester.

Maintaining the 8900 in One Word: Simple 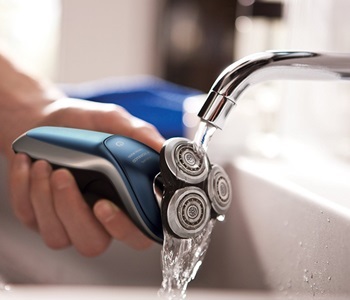 Your everyday maintenance for this shaver is dead simple. You rinse the head under warm water, and you’re done. If you have a tube of clipper oil lying around, you could do worse than adding a drop to each rotary head every few weeks.

But the monthly or bi-monthly maintenance is a little more complicated. Unlike the 3000 series Philips shavers that pop open for easy deep cleaning, this shaver requires you to remove the shaver head and dismantle the front and back plates to clean inside the rotary heads.

The process will require ten to twenty minutes of your time. I think the deep cleaning is worth it though. I prescribe to the belief that a well-maintained shaver stays sharper longer than one that’s left unattended.

One negative of the 8900’s feature sharing with the 9000 line is that replacement blades aren’t cheap. I discourage you from buying the cheap knock off replacements. You need to buy the good stuff from Philips, just budget accordingly.

Having tested the shaver for a few weeks and used all its features, including both wet and dry shaving, I walked away from the 8900 impressed by its features and price point. This is a well-rounded rotary shaver.

My only caveat is that it’s a rotary shaver, and just like with foil technology, this device comes with its own quirks. 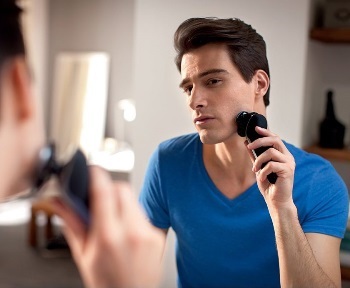 First off, it’s not my first recommendation for those with sensitive skin. I mean, if you’re prone to some redness after shaving that’s normal. But men who develop rashes and ingrown hairs even with wet shaving should look elsewhere.

Battery life lasted me just over a week, and charging this shaver seemed quicker than advertised, around fifty minutes for a full charge.

I shaved every other day for most my time with the 8900. Each shave took me about five to eight minutes. The time didn’t change from wet to dry shaving.

And I even grew to enjoy the trimmer attachment. The separate head attachment design means it has more power than your average slide or flip up trimmer. And the beard guard worked well, too.

Overall, I think this shaver is up there with my favorite rotary devices, including the high-end 9000 model.

What I Liked About the Philips Norelco 8900

While no shaver will ever be perfect, some devices get closer to our ideals than others. And the Philips Norelco 8900 does a good job of cleaving the meatiest features out of the 9000 and leaving the fat.

I think for rotary shaver fans this is a no-brainer purchase. The newer features you probably haven’t experienced in the Philips line are here and they’re impressive. And the quality you expect from the brand is on display, too.

For newcomers, the choice is just as clear. If you’ve never tried a rotary shaver, this is a great starting point. Don’t worry about FOMO when purchasing the 8900. You won’t be left behind the technology curve in the next few years.

I hope you’ve found my Philips Norelco 8900 review informative and enjoyable. If you aren’t totally sold on the 8900, check out our other electric shaver reviews. Good luck!

allaboutrazor.com is a participant in the Amazon Services LLC Associates Program, an affiliate advertising program designed to provide a means for sites to earn advertising fees by advertising and linking to Amazon.com