Look, let’s be honest with each other. We both know that every product has some sort of gimmick or innovation that’s supposed to set it apart from the competition.

This is natural. I mean, even animals do it. The rhino is unique because it has a massive horn, and the giraffe is the horse lookalike with the long neck.

Electric razors are no different. And the Panasonic Arc5 ES-LV95-S is the one with the five blades. That’s its gimmick. That’s the way Panasonic engineers separated it from the other shavers.

But just because it’s a gimmick doesn’t mean it can’t be useful or can’t do you some good. Look at the giraffe. It can eat leaves ten feet off the ground. Can your sister’s pony do that?

Throughout this review, I won’t hold the five-blade gimmick against Panasonic. That’s my promise to you.

If the five-blade thing works, and I like it, I’ll tell you so. But if for one second I think you should save your hard earned money and buy a shaver with fewer blades, I’ll tell you that too.

Below, you’ll find one heck of a detailed review on the Panasonic Arc5. I tell you what’s in the box, what to expect from the product, and how well it shaves. I’ll even tell you how it works a few months down the line.

And by the end of this review, you’ll know if this is the shaver for you.

A Look Inside the Box

Just a note before I tell you what’s inside this shaver. The LV95-S is no longer the top model in the Panasonic lineup. That moniker goes to the new third generation model, the LV6A and its many iterations. 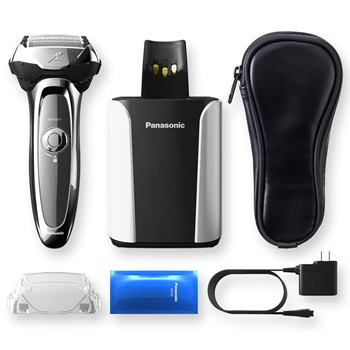 But either way, I still think this shaver is worth reviewing. It’s had some time off the line and the kinks are worked out.

Honestly, the biggest bummer by far with this Arc5 second generation shaver is the packaging. Out of the three main brands Panasonic’s Arc5 is the one that drops the ball.

Most of the items you get with the Arc5 are decent. It’s just the overall design of the box that turns me off. It doesn’t scream cutting edge. In fact, the box is like their Arc4 and Arc3 lines. It’s a whimper, and it certainly doesn’t leave me all agog to shave with this thing.

Anyways, this is what you’ll find in the box:

Get Panasonic Arc 5 at Amazon

Up Close with the Arc5

What the Arc5’s packaging doesn’t do for me, the shaver more than makes up for. It’s a stylish device.

I’ll admit that, yes, it’s all plastic. But so are the higher end Braun and Philips models. The chrome stands out from the first moment you hold it. And it buffs out nicely too once you get some shaves in with it and take a cloth to the chrome. 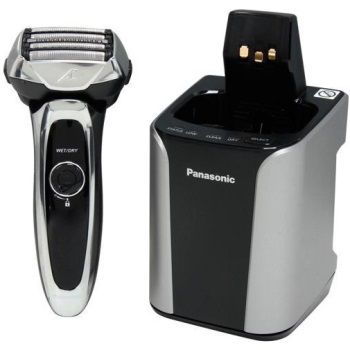 The Panasonic ES-LV95-S is lightweight. And if I’m being honest, it’s also slightly top heavy. This isn’t a big deal. But keep it in mind as you shave. If you’re the type than presses down on the foils, you’ll be pressing even more than with a shaver that’s balanced.

The front-facing display blinks in this retro 80s blue and red coloring that I think works well its futuristic design. And because it’s made in Japan, the plastics all seem high grade. I wouldn’t drop it in the shower. But handling it normally around the sink and shower shouldn’t damage it.

The front plate’s chrome ends at a seam along the sides of the shaver. From there you’ll find a soft-ish, rubbery plastic material.

I’d prefer a fully rubberized grip over this smoother plastic. It has some grip. But I can see those cursed with butterfingers experiencing some close calls.

There’re slices cut into the bottom of the shaver’s handle and the white paint inside these cuts looks cool and adds some texture and grip.

Notice on the back of the shaver that there’s are three nodes on the handle. These are so it can charge while holstered inside the Clean and Charge station, which I’ll discuss in the Extras section of my review.

Overall, the shaver feels solid in my hand. Plus, it’s very comfortable. The best way to hold this shaver should come naturally. You won’t have to think about it. And in the end, I think the comfort factor matters more than any other.

Shaving with the Panasonic Arc5 ES-LV95-S: Get Out the Way

For all my jabs at the Panasonic Arc5’s build quality, I can’t deny that it delivers a great shave.

The curved, ultra-sharp blades do a lot of the work here. One of the key selling points of the Arc line of electric razors is that the blades and foils are bent on a 30-degree angle. 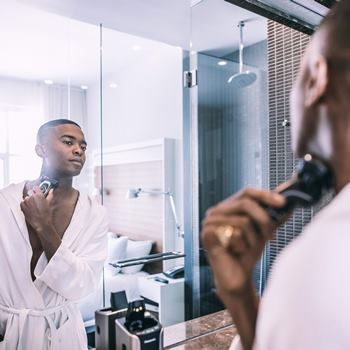 This is supposed to help the shaver contour to your skin. And mostly I think the arched blades match your skin more than other shavers. I can’t say how much more, but every pass sliced plenty of hair. This shaver gets close. Real close.

I haven’t measured the Arc5 compared to other premium shavers. Still, my ballpark guess is that it sports the widest head of the bunch.

This isn’t a negative. In fact, there are plenty of reasons to think of the wide head as a positive. The extra room it covers on your face means it shaves more hair per pass than the competition.

I tested the shaver both wet and dry. It works great either way. Also, the bigger head seems to help with shave gel or foam control. Some products gunk up as you wet shave and you need to rinse them out mid way.

I never had that problem with the Arc5. And having the option to rinse off the blades by popping off the foil after my shave was a welcomed treat. This is not possible with high end Braun and Philips shavers.

The 14,000 cuts per minute (CPM) linear motor sounds tinny, maybe even a little hollow. But the shave gives no impression of a weak motor. Truthfully, the opposite seems to be the case.

The battery on this shaver lasted me an average of seven to ten days. But the time depends on how much you’re shaving. If you shave every day, expect to plug in the shaver once a week. It’ll take an hour to charge.

A Look at the Extra Bits

Can I be honest with you? I don’t like the included soft leather case. Not even a smidgen. Maybe this doesn’t matter to you. But to me, a soft pleather case for a premium electric razor boggles my mind.

Sure, Panasonic also included a protective cap for the foils. But that doesn’t mean the shaver won’t be crushed if precariously slipped into a bag during a spell of pre-flight forgetfulness. All it means is that when it gets crushed, you’ll also have to pick up all the bits of plastic from the shattered cap. 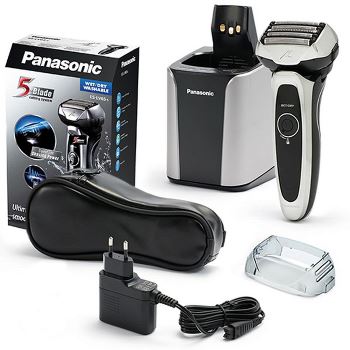 I agree that it’s better than nothing. But why can’t Panasonic see that every other brand has upgraded their cases to hard-shells?

Ranting aside, the rest of the extras that come with the Arc5 are actually worthwhile.

The Clean and Charge station is where your extra money is going over the other Arc5 options, and for most people I think it can save you time and needless frustration.

Using the station is easy. You just slip the electric razor into place when you’re done shaving, and the device rumbles awake and begins a cleaning cycle. That’s it.

You get one detergent pack in the box. I found it lasted about two months. And that’s throwing the Arc5 on the station every week or two.

Now, for some consumers, the station may not be necessary. There are those among us who like to clean their own tools and gadgets. They enjoy the mundane task of taking apart their electric razor and washing each part.

And to all of you who are nodding right now, great. Maybe you don’t need the Clean and Charge station. But for the rest of us, we’ll be busy doing watching Game of Thrones re-runs. 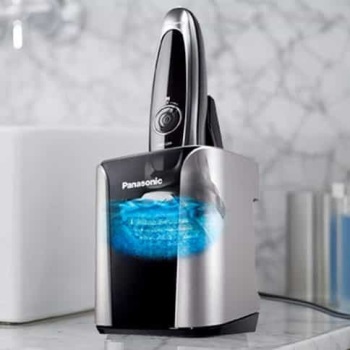 The Clean and Charge station requires detergent packs. You can buy a box for a reasonable price on Amazon. To keep the station working long after your purchase, you must clean out the detergent basin and the cleaning bowl routinely, like once a month.

It’s not a lot of work. I think it’s slightly ironic though. You buy a cleaning station to reduce your maintenance on your shaver and you end up needed to clean the station instead.

Also, make sure to remove the foils from the Arc5 once a month and give it a good rinse. Even using the cleaning station routinely, I found some residue build up on the blades. Over time, that residue can lead to oxidization and dulled blades.

With a few months of using the Arc5 as my main shaver, what do I think?

My lasting impression with this device is overall a good one. The shave quality is still the same as it was the first day I brought it home. And that is mostly thanks to the nanotech blades and Japanese build quality.

Initially, I had trouble reaching some spots under my nose with the shaver head. It’s just so darn big. But with some tugging and angling I figured it out.

The trimmer can seem a little feckless. But I was asking more of it than Panasonic designed it for. The trimmer works great for lining up your sideburns. And if you need it for anything more, such as cutting back body hair, buy a dedicated device.

What I Liked About the Panasonic Arc5 ES-LV95-S

Now that I’ve inspected every inch of the Arc5 and shaved with it many times, do I recommend it? Is the five-blade difference just a useless gimmick?

Personally, I don’t believe it is useless. I admit that there are some faults to the shaver. It’s not perfect. The handle could be more durable, and I think the wide shaving head can hinder performance for some people.

But as a premium shaver, the five-blade thing has advantages. It shaves close and quick. The blades are sharp. They stay clean for a long time.

I like the motor, too. It’s beefy yet subtle and gets through my hair even after letting it grow for over three days. This is a good gimmick. Panasonic’s engineers came up with something that separates this electric razor from the pack.

I recommend the Panasonic ES-LV95-S for anyone on the hunt for a premium shaver. And if it’s on sale, I think it’s especially a worthy option in the aggressive herd that is the shaving competition.

allaboutrazor.com is a participant in the Amazon Services LLC Associates Program, an affiliate advertising program designed to provide a means for sites to earn advertising fees by advertising and linking to Amazon.com