Gillette is a very popular brand in a shaving industry. They’ve been manufacturing razors for over one hundred years. Founded in 1901 by King C. Gillette, the company is renowned for the sharpest, most used razor blades in the world.

Although the 5-blade system was seen as a wild idea when released in 2006, it’s a top seller every year for the company. Many men swear by the effortless shave. And the various high-tech handles have become a collector’s item.

No matter what handle you use, you must replace those cartridges with either a Fusion or Fusion5. And while they are similar products, they aren’t identical. It’s worth knowing the differences.

In this Fusion vs Fusion5 comparison, I’ll take you through the shaving experience, the specifics of the razors, and a detailed side-by-side analysis. But most important, I’ll give you my expert recommendation on which one you should buy when time to order more blades.

Which cartridge did I end up liking more? Read on to find out.

Remember 2006? Tiger Woods was on top of the world. Pluto was downgraded to a dwarf planet. And Gillette released the first 5-blade razor called the Fusion.

Before the Fusion, men had multiple options from Gillette. Their most notable cartridge razor at the time was the Mach3 which housed three blades.

Building on all that they learned from the Mach3 series, Gillette invented the 5-blade cartridge. Not only did they add more blades but reduced the space between blades. 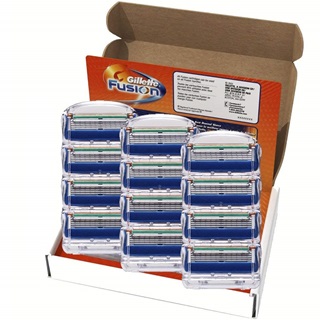 3-blade razors were prone to skin bulges and pressure points. As you glide a Mach3 across your face, your skin rises in between the blades. This causes irritation and sensitivity issues.

The Fusion distributes the blades evenly along the surface the razor. And the progressive geometry drops each blade a little lower than the last to cut hair below the surface of your skin. These factors increased the smoothness of your shave in fewer strokes than other razors.

Gillette didn’t stop there with the Fusion. They upgraded the Lubrastrip along the top of the razor to last longer and provide more lubrication per stroke than their competition.

Get Gillette Fusion at Amazon

Like their other premium razors, the Fusion pivots for advanced contouring across the surface of your face. You don’t have to manipulate the razor or develop a skill to use the Fusion efficiently. It works perfectly the first time thanks to its pivoting head.

The precision trimmer solved a long-standing issue with their Mach3 line. The razor’s wide and flat head made it difficult to shave in tight areas. So although the Fusion provides a close shave, the added precision trimmer also gives you the control you’d have with a single-blade or safety razor.

Another feature Gillette brought over to the Fusion was the skin guard. That rubberized grip just below the blades does more than just keep the blades secure. It works like your hand does to stretch skin as you shave. Keeping your skin taught allows for a closer shave.

The skin guard has a few other purposes built into its design. It pushes excess shaving gel away as you shave so that the blades keep in close contact with the proper ratio of shaving gel to skin. And it protects your fingers from slicing along the blade when you’re handling the shaving head.

Like all premium Gillette shaving cartridges, you can attach a Fusion to the various models of razor handles. Check your handle’s manual to confirm if it’s Fusion-ready.

Gillette released the Fusion5 in 2010, four years after introducing the first 5-blade cartridge razor, the Fusion. Gillette engineers took all the data they gathered in the years since the Fusion to make the Fusion5.

The Fusion5 also goes by its more well-known moniker, the ProGlide. You’ll often hear it called this online. The ProGlide distinction comes from its upgraded Lubrastrip, one of added features over the standard Fusion cartridge razor.

Upon looking at the Fusion5, it’s clear that the cartridge looks different. But how did Gillette alter the Fusion5? It turns out they revamped nearly everything about it. 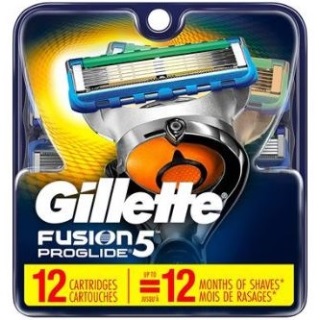 Nearly all aspects of the Fusion were retooled with the Fusion5. First, there are the blade stabilizers. On the sides of the cartridge and down the middle they molded a new spine to the head. These spines notch the blades in place.

But the blades aren’t fixed. Instead, they achieve a delicate adaptive balancing act. What this means to your shave is that the force of shaving cream and your whiskers don’t shake the blades out of alignment. And the blades remain malleable enough to move with the contours of your face.

This blade stabilization provides a smoother shave in lesser strokes than the original Fusion. They also say it reduces the irritation some men with thicker facial hair experience.

Get Gillette Fusion5 at Amazon

Gillette didn’t stop there. Next, they tested and recalibrated the blades. They found that the first four blades could be thinner to cut hair faster and more precisely. So, they shaved the edge of the blades back, making a blade system that cuts faster.

But thinner, sharper blades wouldn’t mean much without proper lubrication. That’s why Gillette also removed the Lubrastrip from the Fusion and installed a more advanced formula. The razor coats your face with mineral-rich lubrication that lasts long enough so you can complete your shave with no irritation.

To push their no-resistance philosophy further, they added a patented coating to all 5 of the blades. The low-resistance coating sweeps away cut hairs faster than other razors so you get less buildup and shave longer before rinsing the cartridge.

The Comfort Guard works together with the blade’s coating, too. The bottom of the Comfort Guard has slotted holes that work much like a snowplow. They curl and push shaving cream away from the blades and up towards the head of the cartridge.

Excess shaving cream can cause the blades to lose contact with your skin. The Comfort Guard alleviates this problem in a rather ingenious way.

So overall, the Fusion5 seems to expand on the basic principles that began with the Fusion. What’s also great about this cartridge razor is that it snaps into the Fusion brand handles, including the Power and Phantom models.

Detailed Feature Comparison of the Gillette Fusion vs Fusion5

Comparing the Fusion to the Fusion5 is a lot like looking at two models of your favorite car. While the fusion came out first and altered the shaving landscape forever, the Fusion5 advances the technology in beneficial ways. Below, I break down the key factors in which the Fusion and Fusion5 differ and the unignorable ways they’re the same.

Because they’re both Fusion cartridges, they share the same 5-blade design. The original fusion sports the vanilla blades. They’re sharp and precise. I noticed, however, that they pull a little more than I’m used to.

The Fusion5 boasts the upgraded blade stabilizers in the middle and the ends of the cartridge. There was significantly less hair pulling with the Fusion5.

But the major addition to the blades on the Fusion5 is the upgraded sharpness and no-resistance coating. The sharper blades are noticeable on the Fusion5. Even on three-day growth I noticed less pulling and tugging when shaving the denser parts of my beard, like around my chin.

At first glance, the two razors seem like they’re the same. In many ways they are. The spring-like pivoting action is identical. They both lock when flipped around to use the precision trimmer.

But the design has some unique differences once you poke around. The Fusion’s skin guard is much wider and pulls the skin taught more than the Fusion5.

I don’t have specs on the exact spacing of the blades, but the Fusion5’s blades look more spread out than the Fusion’s. This could also contribute to the smoother overall experience of the Fusion5.

The top lubricating strip serves a few purposes on the Fusion series cartridge razor. First, it lubricates your face as you shave to reduce irritation and provide your freshly shaved face with a thin barrier to promote healing. And second, the strip notifies you when to change blades by turning from green to white.

The Lubrastrip on the Fusion and Fusion5 are different. The original Fusion’s lubricating strip is smaller and lasts less time on average than the Fusion5. This means you’ll be switching out blades a few days before the Fusion5.

Gillette overhauled Fusion5’s Lubrastrip. The entire reason for calling the Fusion5 ProGlide revolves around the new Lubrastrip. It contains vitamins and polymers to promote post-shave healing.

One thing you get with both cartridges is a quality line of dedicated handles. The Fusion and Fusion5 connect to all the Fusion series Gillette handles. This includes the Power handles that vibrates to help cut tough hair.

The base handles are ergonomic, and the sturdy grips make it an excellent choice for the shower. The upgraded Flexball model can help those who have trouble contouring their razor around the jawline and chin.

Easily the most important factor when you’re deciding between the two cartridge razors is the shave. When you combine all the differences and similarities in the Fusion and Fusion5, which one shaves better?

Well, the results are a lot closer than I expected. The fact is, they each provide close shaves. I think the 5-blade design does most of the work for both cartridges. But you’re more likely to notice irritation with the Fusion over the Fusion5.

The 4 years of research and development that went into the Fusion5 changed just enough to edge out a gentler experience than the original Fusion.

What Are the Similarities Between the Fusion and Fusion5?

What Are the Differences Between the Fusion and Fusion5?

I’ve spent a lot of time with the Fusion series over the years. I’ve since tested and used many other brands of cartridge razor, but it was a nostalgic experience to come back to this landmark achievement.

The Fusion5 vs Fusion recommendation was a tighter race than I expected. Both cartridges provide an exceptionally close shave. But having tested them side by side and rigorously gone over the features, I recommend the Fusion5.

I think the biggest addition Gillette made in the leap from the Fusion to Fusion5 was the blade stabilizers. By locking the 5 blades in place, they assured a more even and comfortable shave.

Add to this the updated Lubrastrip and advanced Skin Guard and the obvious winner only becomes more obvious. The Fusion is still a great cartridge, but it doesn’t quite compare to the Fusion5.