Shaving is one of the tasks that men have been doing since the dawn of civilization!

The shaving method and equipment has seen quite a lot of changes since then. But it has been through a true revolution after Gillette introduced its products into the market. They keep coming up with new ideas, innovations and technologies to improve the shaving experience so that you can have a better shaving experience.

The Fusion razor is one of the latest innovations from Gillette to provide a close and smooth shaving experience to its users. The Gillette Fusion comes with various options for razor cartridges. The ProGlide and ProShield are the top two options to be noted.

We hope this head to head comparison between the Gillette Fusion ProGlide vs ProShield will help you to choose the right one according to your personal requirements.

Among all the different refill cartridges Gillette makes for the Fusion series, the ProGlide is one of the most popular refill blades. The name of this razor kind of explains the major features of this razor which is the best blade gliding experience over your skin. However, there are many other features available in this razor which enhances your shaving experience. The ProGlide delivers the best anti-friction blades to react over the many contours and curves of your face, thus providing you with a smoother cut for each facial hair. 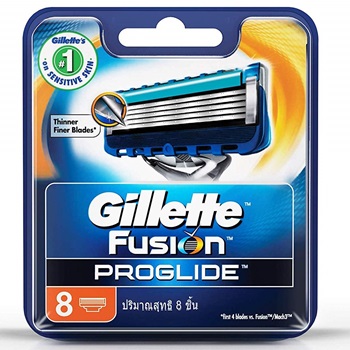 It is a five-blade razor and also comes with a precision trimmer for sideburns and those hard to reach areas, like under the nose and chin. It has less tug and pull compared to other blades as a result of the first four blades on the ProGlide cartridge. These blades are the thinnest and the sharpest blades manufactured by Gillette. You will get maximum cutting results with each stroke, as these blades cut hairs while providing a smoother shave every time.

The ProGlide delivers effortless gliding experience over the skin. While doing so, it does not create any irritation or razor burns to your skin. There is a lubricating strip added on the top of the ProGlide razor cartridges. This green moisturizing strip is called the LubraStrip by Gillette. This strip delivers additional and better moisturization compared to other Fusion models. The lubrication strip also lasts longer and consists of glycerin and mineral oils. So, for those with sensitive skin will breathe a sigh of relief.

In addition to the lubrication strip, the ProGlide also features a comfort guard at the bottom of the blades. This guard has a number of soft and flexible strips that stay next to each other. The guard helps to maintain a plain and smooth skin surface which does not allow the blades to dig in too deep while gliding. The comfort guard also removes unwanted disrupting materials from your skin such as small hairs or shaving foam or gel.

Get Gillette ProGlide at Amazon

The ProGlide is the best option for you if you want a quick and flawless shave. Its effortless gliding ability makes it extremely popular among the consumers. Also, it has received higher recommendations by experts.

I like the ProGlide for its easy usability and effectiveness. You would be able to get maximum hair with a single stroke with this razor. This razor blade is compatible with any Gillette Fusion razor handle.

The ProGlide delivers more shaves compared to the rest. You can have up to a month’s shave with a single cartridge. You would get the same shaving experience with the ProGlide whether you use shaving cream, shaving foam or shaving gel. It even works perfectly with shave butter. I would suggest the ProGlide to both first time shavers as well as the experts.

The ProShield is another best-seller refill cartridge from the Gillette Fusion razor series!

The Gillette ProShield features a unique lubrication system which provides you with an extended comfortable shaving experience both before and after you make the strokes. The ProShield razor gives extra protection to your skin from discomfort, irritation and razor burn while providing a smooth and close shave each time. The micro combs of this razor feeds hairs towards the blades for maximum cut with each stroke. 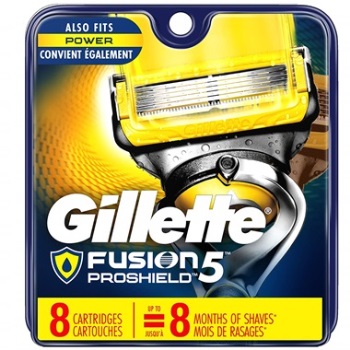 The ProShield is also a five-blade razor which has a precision trimmer at the top of the back side. The precision trimmer is used for precision trimming and lining of sideburns and hard to reach areas of your face like around your nose, chin and neckline. Gillette uses thin blades for extra sharpness and durability. Although, the blades are extra slim, they can continue cutting through hair effortlessly and without any pulling or tugging on the skin or hair.

The Fusion ProShield is compatible with all types of shaving creams, foams and gels. You can even shave off the 5 o’clock shadow by just soaking your face with water. However, Gillette highly recommends the use of Gillette Fusion series shaving gel for the most enhanced shaving experience. One ProShield refill cartridge will take you a long way. Sometimes one cartridge can deliver up to one month or more of shaving. The ProShield also has a cooling version of it, which delivers extra cooling for your shaving.

Get Gillette ProShield at Amazon

Unlike other razors, only the Gillette ProShield has dual lubrication system. It is innovative when you think about as it moisturizes your skin both before and after the blades cut. This mechanism provides extra protection to your skin from irritation and discomfort. I suggest this razor for shavers with extra sensitive skin. Also, it is perfectly suitable for first time shavers as the added protection helps to have perfect shaves without the risks of any nicks and cuts by an amateur hand.

The ProShield refill will fit on all Fusion and Fusion Power razor handles. This refill cartridge has the thinnest blades ever built by Gillette to glide over the skin with little to no tug and pull. The ProShield single blade precision trimmer on the upper back side is very useful for trimming sideburns and it has anti-clogging mechanism so you can rinse the blades very easily.

Both the Gillette Fusion ProGlide and ProShield are made by the same manufacturers, of course and for the same razor. Therefore, there are many features among them that are common. Although, they both have some distinctive features that separates them from each other.

Here are some of the specific feature comparisons of the ProShield vs ProGlide:

The Gillette Fusion ProGlide and ProShield both are made with five blades. As a result, they are both made for delivering a close and smooth shaving experience. The blades are placed closely for providing a closer trim. In both, the first four blades are lighter in weight compared to the fifth blade. These four blades are the thinnest and sharpest among all the blades that Gillette offers. The fifth blade finishes off the cut with a firm layout. Combination of these blades are strong enough for cutting through the thickest of hairs while ensuring a close shave.

Although, the shaving experience with both blades are pretty much the same, the ProGlide delivers better gliding over the skin.

You would be able to fit both the Gillette Fusion ProGlide and ProShield cartridge on any Fusion handle made by Gillette. You can even use the FlexBall feature with both of these cartridges. This allows the blades to react to the curves of your skin to cut more effectively. These cartridges can also be added onto handles that include electric motors. The electric motor would generate vibrations along the cartridge, thus creating a more comfortable shaving experience.

A precision trimmer is fitted at the top back of both the Gillette Fusion ProGlide and ProShield cartridges. This allows for a more precise edging, trimming and shaving over hard to reach areas of your face. It is very easy to use, just turn the razor around and use the precision blade to cut the hairs of sideburns or under the nose and chin, which are normally very difficult to reach. You can also use it for outlining your beard and mustache to get the look you desire.

Both the Gillette Fusion ProGlide and ProShield have their lubricating strip to provide moisture over the skin. The ProGlide has a single lubrication strip which moisturizes the skin after the glide. On the other hand, the ProShield has a double strip that moisturizes both before and after shaving. These razors have micro combs at the bottom of the blades which drives the hairs towards the blades.

The ProShield is able to deliver better skin protection with its dual strips compared to the ProGlide.

The two razors have the lightweight feature while ensuring a longer durability. These razors are assembled with the thinnest and the sharpest blades made by Gillette. Therefore, they are very light in weight. But when directly comparing between them, the ProShield is slightly lighter than the ProGlide as it lacks the materials for a flex guard. Therefore, making it weigh a little under one ounce. Whereas, the ProGlide weighs just over one ounce.

Similarities Between the ProGlide & ProShield

What Differences Are There Between Them?

Even though there are very few, the following are some distinctive features of the two razors which make them different from one another:

Both of these refill cartridges by Gillette are equally efficient and able to deliver excellent shaving experience for users. Most of the features of these cartridges are pretty much the same. Although, there are few features that varies.

The ProGlide is more about delivering a close and cleaner shaving experience. Whereas, the ProShield is designed to be more focused on the skin protection for those with sensitive skin.

Making a decision while choosing between these two entirely depends on what type of shave you want and your skin type. If you want a quick, clean and close shave, then the ProGlide is the right choice for you. And if you have sensitive skin which need better protection while shaving, then you should go for the ProShield refill cartridge.

Whether you choose to ProGlide or ProShield, you will get ProResults!

See Also: Schick vs Gillette: Which Cartridge Razor Is The Best In The Market?

12 thoughts on “Gillette Fusion ProGlide vs ProShield: Which One Is Better Choice?”