If you’re searching for a top-notch brand that will always iron out your facial hair and keep the strands neatly put at all times, Braun should definitely be one of the better options on your list of promising prospects!

When all is said and done, it’s safe to say that Braun is one of the leading brands when it comes to electric shavers. The devices or pieces of equipment they produce not only offer efficiency at its finest, but are specialists in giving users a clean shave without any tugging or pulling; two issues that can lead to minor inconveniences such as nicks and cuts.

While many rely on Philips for the mechanics of their rotary blades, the shavers of Braun, which typically comprise foil shavers, could be great if you prefer a procedure that is almost like using an advanced version of a manual razor with more accuracy, precision, and security.

Two excellent models that Braun has added under its belt in recent years are the Braun Series 9 Pro and the Braun Series Sport. The attributes that they bring to the table are hefty, and the benefits that they offer can beat the potential of your current shaver by a mile. The Braun Series 9 Pro, according to professionals, is one of the best electric foil shavers out there. The 4+1 blade technology is extremely helpful and reliable at giving a clean and precise shave, which brings to the table favourable results.

Since the mechanics used for it are hardly any different in contrast to most of the models in the Braun Series 9, the blade of the Series 9 Pro offers the same shaving results, but is said to be more seamless and gentle on one’s skin.

The Braun Series 9 Pro is also said to be more effective at removing longer strands, which makes it the perfect fit for removing stubbles as well as a 7-day old beard.

Additionally, just like its predecessors, the Series 9 has a running time of 60 minutes with the help of its Li-Ion battery. It also has a charging station that allows the gadget to perform on a peak level for one session after a 5 minute quick charge, which also acts as a cleaning station that carefully cleans the blades after every concluded shaving session.

Underneath the power button is an LED display, which is typically used as a battery indicator, and flashes the status of the battery life when in use and when stationary.

With the Braun Series 9 Pro, travelling should be easy. This is due to its travel case, which not only protects the shaver at all times, but also recharges the battery life when used.

All things considered, if you prioritise not only optimal results, but want to shield your skin from nicks, tugs, and pulls when using an electric razor, the Braun Series 9 should be the only gadget you should put your money into. While it runs a bit costly in the eyes of many, it comprises materials that make it durable in the long run. 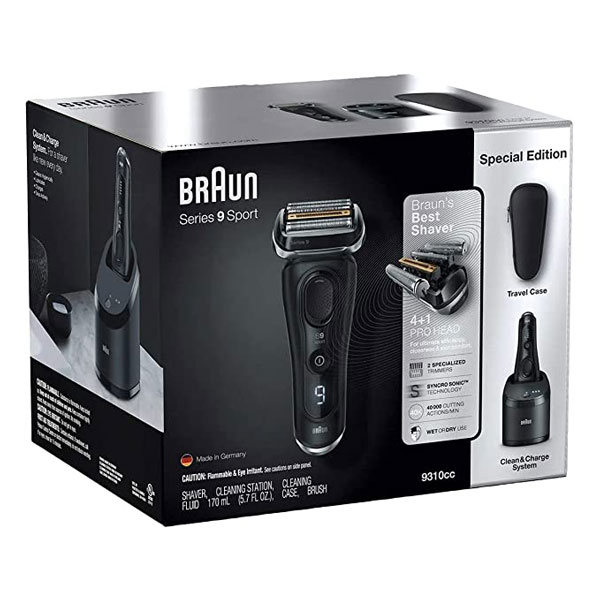 The Braun Series 9 Sport is what we like to call a budget-friendly model of the 9 Series. For a slightly reasonable price, the Braun Series 9 Sport provides users with sublime shaving results with the assistance of its 4+1 blade technology. While the motor it contains tends to be noisier than that of the Series 9 Pro, the pivoting head as well as the build are eerily similar.

Just like a majority of the instalments in the Series 9 franchise, the Braun Series 9 Sport comes with a decent-sized Safety-Lock button, which is placed right underneath the pivoting head and above the power button. Although the button could be nostalgic to the loyal fans of Braun shavers, it could appear to be hectic when going on trips.

In addition to being more affordable, one of the very many qualities that makes the Braun Series 9 Sport so desirable is its battery life and running time. Just like its counterpart and all its predecessors, the Series 9 Sport can serve without interval for 60 whole minutes.

The charging station, which is also the cleaning equipment, enables the gadget to perform at its best on all occasions. Even under tightly packed circumstances, the Braun Series 9 Sport can give you fruitful results due to its 5 minute quick charge, which is typically good enough for 1 session!

Monitoring the battery life is also easier when using the Braun Series Sport, as it also has an LED display that is placed right underneath the power button.

Another element that makes the Braun Series Sport a bang for its buck is the additional pieces of equipment that is provided with the gadget. In addition to receiving the electric razor, the packaging contains a cleaning fluid, a charging station, a cleaning station, and a travel case.

In conclusion, the Braun Series 9 Sport is an excellent electric razor to rely on if you’re seeking a way to amp up your grooming game. While it can be challenging to clean up a scruffy beard under the assistance of the Braun Series Sport, the tool can be of great help if you need a quick shave before leaving, and a trustworthy companion for maintenance cuts.

Braun Series 9 Sport Vs. Pro: A Thorough Breakdown On Their Features And Main Differences

Now that you’ve garnered knowledge on the basic functions, uses, features, and benefits about the Braun Series 9 Sport and Braun Series Pro, it’s finally time for the main event!

The Series 9 Pro and Sport are extremely similar at the end of the day. They have the same mechanics, provide the same essentials with the packaging, and could be great investments to make if you’re seeking equipment that will serve you for an extensive period of time. However, due to having a series of minor differences in their build, performance, and price tag, siding with one of the two contenders was rather easy for us, and should be just as effortless for you! So, without further ado, here are all the key differences that sets the Braun Series Sport and Pro apart, and ultimately makes the Braun Series 9 Pro the king of the hill! Cosmetically speaking, the Series 9 Sport looks the same as the Series 9 Pro. Both models contain a lean build, comprise a power button with an LED display underneath, and are made of a leathery suede material.

However, within the build are minor differences that separates the two. The first difference within their build is the safety-lock button. The Braun Series Sport 9 comes with a sizable and relatively larger button for safety lock which can be found in a majority of the Series 9 models. While this feature could be moving for pre-existing users of Braun, it could prove to be challenging to travel with due to its hefty size.

The safety-lock button of the The Series 9 Pro, on the other hand, is more firm and easier to use. The flick-on system is powered by a compact slider, which stays grounded when packed in luggages. Since the new safety-lock is easier to manage, the Series 9 Pro could be a better fit for newbies. 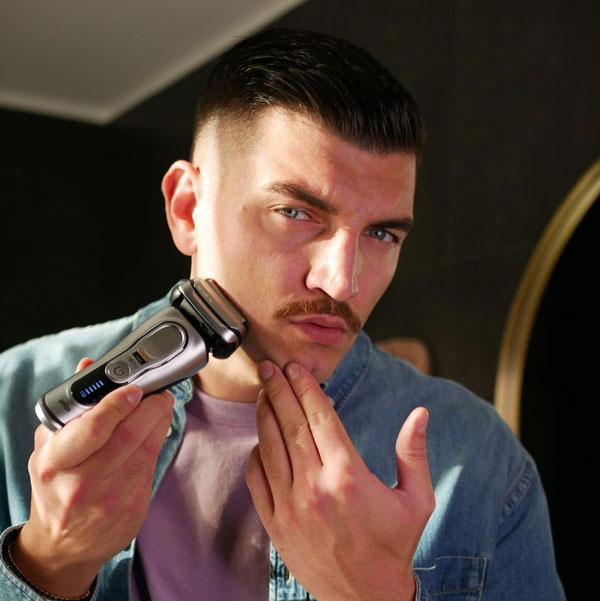 When put to use, the Series 9 Sport is just as efficient as the Series 9 Pro at removing facial hair as well as hair from the scalp. Since both contain the same 4+1 blade technology, this element didn’t come as a surprise to me. However, the foiling blade on the Series 9 Pro did feel more smooth and relaxing on my sensitive skin in comparison to that of the Series 9 Sport, which caused a bit of pulling and tugging. Nonetheless, both the tools brought forward exceptional results.

The difference between their battery life and running time was also rather invisible. This is because of the fact that both contain a Li-Ion battery that allows them to operate without interval for 60 minutes straight, and enables them to be used for one session after a 5 minute charge.

Overall, both of the tools kept their word and were extraordinary at removing hair seamlessly. However, due to the inconveniences caused by the pulling and tugging, the Series 9 Sport did lose some serious points in my book, making the Series 9 Pro the winner in this segment. Packaging: What’s Inside The Box?

Another element that makes both of them an even match is their packaging.

With the Series 9 Pro, users will be provided with documentation, a charging and cleaning station, cleaning fluid, and a travel case. The Series 9 Sport also comes with the same amount of essentials, which could be a great component to take into consideration if you’re currently siding with the mid-range electric shaver to spend a little less and save a bit more.

However, don’t count yourself out just yet. In fact, if you’re working around a relatively smaller budget, consider taking into account the potential of The Braun Series Sport. In contrast to the Series 9 Pro, the Series 9 Sport is extremely cheap, and can be an easy solution to fix your grooming needs if you don’t want to leave a dent on your savings!

Final Takeaway: The Flagship Is Always Better Than The Mid-range

While the price tag could be an inconvenience to many, those that aren’t new to shaving and are seeking for a dependable electric razor will definitely be able to reason with the substantial value that is attached to the Braun Series 9 Pro. It is durable, efficient, friendly on any and every skin type, and is more travel-friendly due to its compact and hassle-free safety-lock.

Additionally, if you do have a knack for neutral colours with more saturation, siding with the jet black colour palette of the Series 9 Sport should be easier than the classic silver colour scheme of the Braun Series 9 Pro.